Home » In Retro-spect: The Beetle, the Mini Cooper and the Fiat 500

I’m no fashion guru, hence I’ ll stick to writing about cars. What I do know about fashion however,  is that it revolves rather than evolves, and wheels revolve and I know a bit about wheels, so hear me out.

My Dad used to do a fair amount of partying when he was young.  Apparently getting dressed for Saturday night’s jol, started early on Saturday morning. He used get up, put on his favourite pair of Levi’s and then promptly get in the bath – with his jeans still on. You see the look back then was “the tighter the better”, and wearing your jeans in the bath solved the conundrum of getting into a pair of jeans, so tight they were, just like a second skin.  The bath water shrinks the jeans around your body, so you didn’t have to dislocate your ankle to put them on. That was the 60’s.

Similarly once a week when I was a youngster, my mom would drag me along to Aerobics. I have vivid memories of big hair, baggy lumo tops, black tights and leg warmers nestling on what could only be called ballet shoes. That was the 80’s (or yesterday?).

I don’t know what era we’re in now, but with stove pipe jeans clinging to your bums, walking around with blue feet because the blood flow has been cut off at the ankle. Luminescent baggy shirts, with pictures of Marilyn Monroe looking pixilated, and shoes that look like fancy secret socks. Is it the 90’s? I don’t know. I’m confused.

Anyway, I told you I wasn’t a fashion guru, and you’re probably wondering what all this has to do with cars. Well, if you are a product of the current fashion trend, rocking up at Café Vacca Matta, in your Citi Golf, just isn’t going to cut it, even if it is called a CitiRox. You need to accessorize and I’m not talking about oversized earrings or rings that look like side plates, your next car needs to be an extension of your style, and if you’re fan of Retro I have a couple you need to look at.

Let’s look at the disaster of Retro cars available – the new VW Beetle. Basically a Golf 4 in a fancy dress.  VW’s take on a new retro car was a disaster. Boyfriends slunk down in the foot-well only to be more embarrassed by their girlfriends strapping daisies to the aerials. And why would you want a vase in your car? It looks silly and you’re going to have manky old dirty flower water ruining your shoes every time you go around a corner. It’s expensive (R273 000 for the 2 liter), impractical and the engines in the front – everything the original isn’t. So, please don’t buy one and if you have already, sell it. Rather buy one of these two.

BMW makes the latest version of the Mini and they have, like VW, taken an old idea and built on it. That is however where the similarities end. The Mini is in so many ways cooler than the VeeDub.  For starters it’s got the go to match the show. Both the Cooper and Cooper S come with a 1.6 liter engine, however the S version is turbo charged, so at the robots you will leave most racers dead in their tracks.

Trademark go-kart-like handling is a definite. Where the Beetle just looks fat and slow, the Mini really does look purposeful, and racy. You get flashy mag rims that really fill the bold wheel arches. At the back there are twin exhausts exiting in the middle, Nice! Inside is really where things get retro.  It’s got sporty hip hugging seats, a massive, round speedometer in the center of the dash, this also houses information for the radio/cd player and satnav if you spec that option. Options are aplenty on the Mini Cooper and there are literally millions of different ways to customize the car.  From the colour of the roof and wing mirrors, to the stripes on the bonnet.

Don’t however think that you will take a full lift club out on a jol, the rear seats are useless, as is the boot, except for shopping.
Take care when ticking those option boxes  though, as the costs will mount very quickly. At R214 000 for the base model and R270 500 for the Cooper S version this is not a cheap small car. On top of all those options you can add to this car, you can still choose between the Cooper, a Cooper S, the Cooper Convertible and the Cooper Clubman, which sort of solves the problem of only being able to carry midgets in the back.

By lengthening the car slightly and adding a “club door” on one side, for access to the rear seats. I suppose it works, but to me this model just doesn’t look right.  With odd hinged doors on the back, like you would get on a delivery van. If you, like me like your cars fast then the Mini Cooper John Cooper Works is the one to go for. You get more power, more exclusivity and more fun! At R321 000 however, you will be looking for all sorts of excuses to convince your partner that you want to buy a very fast go kart!

The newest of this retro bunch is the Fiat 500. We never got the original 500 here in South Africa. It was a miniscule car, even smaller than the original Mini. Perfect for navigating small narrow European streets, but a nightmare for the Karroo in summer. It was a hugely popular car and still is, Michael Schumacher has one, the original that is.
The new Fiat 500 at face value looks the smallest of these three cars, although it will comfortably seat four. (I use the word comfortably very loosely by the way). It is the cutest, but at the same time has a chunky, sporty appeal that will also appeal to the guy in your life. Fiat says there are 500 000 combinations available on this car. From the colour of the car, to the dashboard colour, the seat colours and fabric and go- faster-stripes if you want, the options are literally endless.

My favourite is the apple white interior option which will really make you feel as though you are inside a Macbook. In fact if you buy this car, it is mandatory that you also own an iphone.
So, if you thought deciding on what to wear was a nightmare, deciding on what car to buy to compliment your big hair and skinny jeans will really give you a headache. My choice? Tell your bank manager to stuff himself, eat toast and water for the rest of your life and go for the Mini Cooper John Cooper Works. You won’t be disappointed. You might have blue feet and silly shoes but you won’t be disappointed. 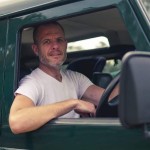 Former Man-Handled regular and car freak, Luke is the STIG and a huge fan of Jeremy Clarkson and James May (Top Gear). Visit his blog for more: www.drivensa.co.za or his Man-Handled archive on StyleScoop.