The first time the name Christopher Strong stayed in my head was at the Pulchritude Sale, when I saw a grey pencil skirt with ruffle detailing on the panels. The skirt was everything I liked: simple, with character and detail and the kind of piece that I would want in my wardrobe forever. I walked away with my new love in a shopping bag, wondering about who the designer or designers were?

Was Christopher Strong made up of a fantastic man duo who loved the female form or a terribly stylish woman who designed clothes for herself? I had to know…

From then on, the name Christopher Strong seemed to come out of my mouth regularly as I gushed over items featured in fashion editorials and made demands to Milisuthando Bongela who runs Pulchritude to make sure that she had them at the next sale. But I doubt I am going to have to threaten Mili again, because this past week, whilst grabbing a quick bite at Royale Eatery, I had the pleasure of meeting Olive for a brief moment and hopefully convincing her that I am her biggest fan and that I want everything she makes and sells.

Exuding a refined and astute taste, she listened quietly as a rattled on about how I needed to have the pants and maxi skirt from Christopher Strong featured in the September issue of Elle Magazine and that if I wasn’t going to get them, I was going to be distraught and devastated. Such melodrama, but I honestly feel like I will not be complete without those items of clothing.

Based in Cape Town, Christopher Strong pieces have a certain bespoke quality about them and I am glad to have heard it straight from Olive’s mouth that the clothes will be distributed as of October in stores in Johannesburg, so at least I won’t have make desperate phone calls and threaten people anymore.

In the mean time though, I am very excited to see the Christopher Strong show at South African Fashion Week on Thursday the 30th of September at 18:00… 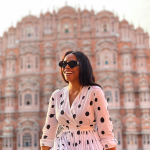