While the Grammys are always cause for celebration, we all know by now that the sudden death of Whitney Houston was a less-than-jubilant start to the Grammy weekend. Many celebs wore black to the event which might be put down to mourning the loss of a superstar.

However, Katy Perry took to the red carpet in sky blue and it appears that she was feeling just Smurfy despite the tragedy and her recent divorce. We think she looked amazing and regal in Elie Saab and she was definitely one of the best dressed of the night. Others who ‘wowed’ include Taylor Swift in a gold Zuhair Murah gown, Kelly Osbourne who kept her en vogue lavender locks for the occasion with a sophisticated, silver sequin gown.

Just as gorgeous from the back, Katy shows off her dress and edgy hairdo

Carrie Underwood also deserves special mention. She tends to go for classic glamour over fashion but she added some sparkle to the night in an elegant, white sequin dress by Gomez Garcia. Her choice of accessories also made a stunning statement.

Taking the title of ‘Worst Dressed at the Grammy Awards’, Cyndi Lauper looked like she was caught somewhere between Cruella De Vil and Medusa for inspiration. We won’t say too much for the lace slip and unflattering jacket either. In a nutshell, we no likey!

We wrap up with Nicki Minaj. This pic speaks for itself. I don’t care if the cloak is Versace; the overall look is in poor taste. It’s the Grammys NOT a costume party. There must be some better way to get noticed.

*Images via nydailynews.com and mirror.co.uk 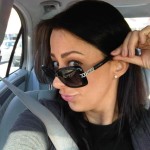 Tamara Polakow writes Glam Slam , an essential glamor girl’s guide to survival. Join her every Tuesday on StyleScoop as she wades her way through the glamazon jungle, one stiletto at a time.

I started my blog in 2008 and have been here, sharing all the things that I’ve loved for the past 13 years.

I hope you’ll stick around and enjoy my content to inspire your LIFE IN STYLE.