Double dose Fragrance Friday today with two fabulous, NEW fragrances from Karl Lagerfeld. One for him and one for her!

It’s been a while since Uncle Karl has treated us to olfactory delights, but with this launch, the king of fashion-cool makes his 2014 fragrance comeback!

Karl Lagerfeld is all about the drama, and all about the details! No wonder he’s considered the most gifted designer of his era and he’s got quite the portfolio! Among his own brand, KARL LAGERFELD, he’s also involved/ been invovled with two other iconic fashion brands; CHANEL and FENDI!

The story behind these fragrances, was to create an IKONIC, AKCESSIBLE, LUXE, KREATIVE (&) KOOL scent for both men and women.

Take a look at those bottles! Sleek and sexy with massive attention to detail! Notice the miniature Karl-head (otherwise known as the IKONIC signature) on the logo, the dramatic chiselled glass and the sleek, studded collars on the neck of the bottle.

These fragrances come beautifully packaged in matching black and white boxes (black for boys, and white for girls), with luxurious bottles that compliment each other.

The lady’s version of KARL LAGERFELD is bright, warm and sophisticated without being old fashioned!

The olfactive pyramid (created by Christine Nagel & Serge Majoullier), consists of lime and peach top notes, heart notes of rose, magnolia and frangipani, with base notes of musks and amber.

On my skin, I could immediately smell the tangy lemony scent (my fave part) which balances out into a warmer, feminine fragrance with hints of floral notes (I couldn’t tell which flower exactly). Finally, it settles into a light, pleasant musk.

When I sprayed and tested it out on a ceramic perfume wand however, the floral heart notes were much more enhanced. I could pick up a distinct scent of rose petals and magnolia. The amber and musky base notes were also more prominent.

I almost expected it to be more daring though, and I guess a bit more edgy? I was quite surprised to find that it’s a very wearable scent that most would enjoy.

Overall, (and IMO at least) this fragrance won’t blow your mind or make you forget your chain of thought, but it will definitely make you very desirable to sit next to. It’s also great every day scent, day or night.

The men’s version on the other hand…

I love a man that smells like a man! And this fragrance is one of those rich, spicy, seductive scents!

Created by a different “nose” (Jean Christophe Herault), the men’s olfactive pyramid has top notes of mandarin and lavender oil, heart notes of apple and violet leaf and base notes of sandalwood and ambery accord.

For me, it’s that mandarin top note that makes me completely weak in the knees!

Both his and her’s KARL LAGERFELD fragrances launched worldwide in March 2014, and you can find them at all the usual perfume stores. KARL LAGERFELD for ladies only comes in EDP (yay) and the men’s EDT.

Have you tried it? 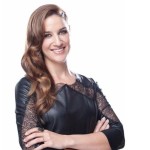 Dimi is the founder, editor and creative force behind StyleScoop. She curates the very best of fashion, beauty, travel, decor and lifestyle, every day, right here!